You are here: Home / other things I have learned / Matcha of the day – the perils of trendy porridge 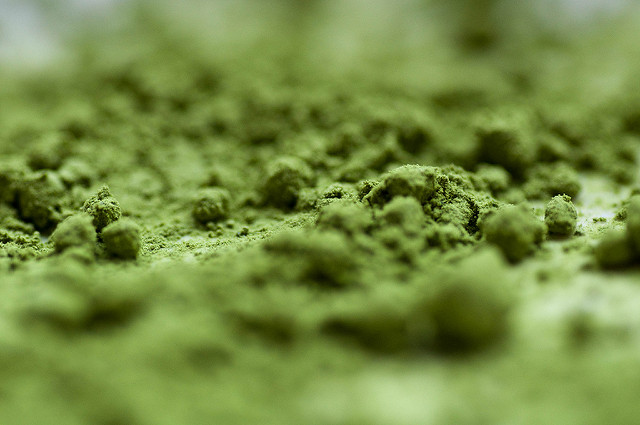 I’m doing a bit more commuting these days – to Edinburgh twice a week, since you ask. The plan is to use all that lovely sitting down, wified time to get writing.

I’ve even bought a fold-up keyboard to use with my iPad. So I’m ready, really ready. No excuses.
And…

Not gazing through the rain, but novels, short stories, blog posts, blimey even a stream of scintillating tweets. I’ll be writing the lot. Can’t wait. Can you?

The only thing that’s lacking is, obviously, inspiration. When I didn’t have time, it was everywhere, but now, pfff, it’s all gone.

Now the only thing I can think of writing is something about how the healthy (and admittedly tasty) the newly discovered (by me) matcha porridge looks exactly like something someone has coughed up. If only I’d remembered to take a photo of it, but it was early and I was hungry.

Besides, taking photos of your meals – even for comic effect – makes you a bit of a pillock. So you’ll have to take my word for it. Imagine you had a nasty chest infection and, finally, things were shifting, you hawk something from deep down. Satisfyingly. Spit it out and now you know what matcha porridge looks like.

What’s matcha? Yes. Yes. You know how I started drinking green tea because I’d read that if you have seven cups a day you lose a stone, it also makes your brain less saggy and your opinions more plausible? I may be paraphrasing as it was a while ago. It’s definitely better for you than a caramel latte or a large gin (though possibly less fun). It also has the added advantage that it may get you out of tea rounds and certainly avoids the danger of a gob full of builders’ with on-the-turn milk and mysterious floaters.

Matcha is powdered and probably enchanted green tea. It has magical powers, or, at least, it bloody should at the price.

So a posh city centre sandwicharium has decided that it will mix it with porridge and add just enough honey to make the lid sticky but not improve the flavour and float a few blueberries on top. Genius.

But here’s where the trouble starts. Once you’ve picked off the blueberries, you have to eat the rest with your eyes shut for safety’s sake. Otherwise, your thinking brain – you know, the bit that understands that buying new trainers alone won’t make you thin and that all the deluxe products in the world won’t make you classy – says ‘it’s yummy and nutritious matcha porridge – tuck in now’. Meanwhile, your subconscious brain, evolved through millennia to avoid the dangers of wild animals, wearers of sinister moustaches and missing out on a bargain, says ‘look out that’s hacked-up phlegm, you wouldn’t want to eat that, no siree Bob, even if your name isn’t Bob’.

This locks you into a cranial spinning wheel while both sides slug it out. Eventually you end up with a 404 error of the head. And you don’t want that before the day’s properly begun.

Lord knows what the answer is. On Monday, I’ll be bringing my blindfold to the breakfast table. Or desk as I like to call it. And I’ll just hope my new colleagues are broadminded types.

◄ Show me the Monets
Why would you want to turn back time? ►