You are here: Home / My Life / Becoming the Fitbit family in an attempt to stop things sagging further

In another of those moments  they don’t tell you about, I found myself gazing at the bathroom mirror trying to work out if my earlobes had begun to droop or not.

It turns out that time is something of a bitch, or maybe it’s gravity that the real villain. 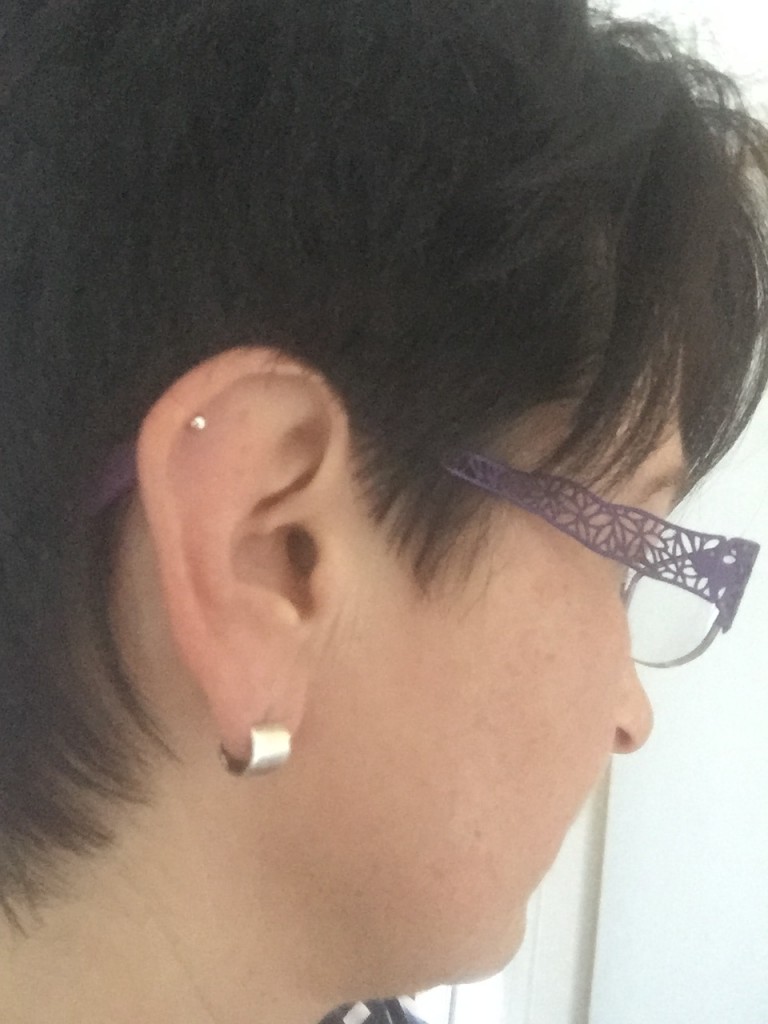 Either way, there’s no doubt about it, my lobes don’t look as, er, perky as they once did. I fully anticipate a lug lifting industry is budding like fury.

Once I believed that the only dangers were a few laughter lines and the occasional grey hair. Oh, the naivety. Apparently nowhere will escape the ravages. Even, it seems, a lady garden will wilt and whither while you’re not looking. As if fighting the murderous rages of menopause and attack of the chin hair weren’t enough of a burden. Harrumph.

So it seems a course of action is called for. Either pull on a beige cardi and open a nice tin of shortbread while you welcome your inner old lady into a bingo-winged embrace, or not.

Not it is then. And the first target in the sights is the middle-aged spread and its evil twin, the getting out of the sofa groan. You know. The one that lets the world know you’re not as springy as you once were.

Welcome then the Fitbit. (Other exercise trackers are available).

Boy Two (recently turned 14, deep sigh, eyeroll) got one first. He does love a gadget. His Fitbit taught me that he actually does do quite a lot of moving without really trying. On the face of it, he might spend much of the time as immobile as a lizard on a hot rock only twitching a tail or a computer game finger, but, as the Fitbit reveals, he’s pretty active. He gets to the sacred 10,000 step target most days without trying.

Then a colleague explained that her impressive weight loss was down to Fitbitting and telling an app what she ate (MyFitnessPal – other food logging apps etc etc). Technology being used as a gentle reminder to keep on track.

So I got one – purple, obviously. And so did the Panther. Now we’re a Fitbit family and we’ve all fallen under the spell.

Last night, for example, the Panther, a determined look on his face, was to be found pacing the garden… for hours. At lunchtime, he walks to a further away branch of Gregg’s and today, in a very unusual turn of events, he was heard to say: “Let’s go for a walk.” So far, though, he’s strangely uninterested in the news that you can rack up 2,500 steps by simply doing the ironing and putting it all away.

It’s motivating me too. If I check the Fitbit app and find that either of them are ahead of me, I’m out of my chair and off for a walk. The gloating is too much to cope with.

And so far, it’s working. After a week or two, I’ve lost a modest couple of pounds. The Panther is considerably lighter and Boy Two finds himself being nagged less often about doing some exercise (or just showing sign of life).

I thought I was pretty fit – jogging a couple of times a week – but I’ve learned that in between, if I’m not careful, I can become the biggest slug in the family.

It’s not going to turn back time or sort out all the wrinkles and sagging bits, but it is a way of making sure we don’t kid ourselves about what we’re doing. There isn’t any alternative to moving more and eating less, but being a Fitbit family might help keep us on track.

The earlobes, sadly, will not gain any benefit. I googled and, yes, ears do grow a bit as you get older and, yes, a lifetime of earring wear can make them droopy. I also learned that, as predicted at the top of the post, lobe lifts are a thing. Earlobe rejuvenation – £1,100 for both ears. (Hats are also available.)

Sponsored by our friends at www.d2king.com

◄ Why the Duchess of Cambridge and I are so similar
PGL Dalguise: The kind of holiday that makes you rethink everything ►