You are here: Home / family / PGL Dalguise: The kind of holiday that makes you rethink everything

It was risky, I’ll admit. I booked us a five-day break at PGL’s centre in Perthshire by way of a compromise.

It’s very tricky finding something that will suit even some of us most of the time. There’s the 16-year-old culture vulture, his 14-year-old brother who only wants to go fast, the six-year-old with the relentless energy and, of course, the grown-ups.

My logic was that if we went somewhere that kept us all busy and where there were no decisions to make, there would be fewer things to argue about and less energy with which to argue.

It was pouring down as we arrived and there wasn’t any wi-fi. A 20-minute debate about who gets which bunk raged and mutiny was near.

Next day it was dry and, after breakfast, as instructed, we headed off to the rifle range. Guns are dangerous, especially so in the hands of those with a grudge and little to lose.

But, it turned out, that the murderous look in Boy Two’s eyes is largely for effect and no blood was shed on the range.

There was a surprise, though. I could shoot straight, very straight. Smashing the record set by a camp customer and that set by the shooting instructors. Crikey. I had no idea I could do that – though, actually, it was just a matter of lining up the sights, not thinking too much about it, breathing steadily and getting on with it. 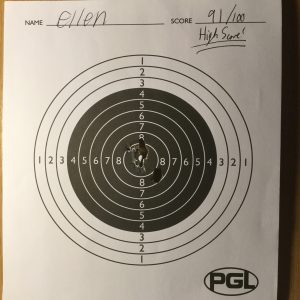 The minute you start giving headspace to losing your aim, going off key, putting people off or not getting the gig/deal/date, then that’s exactly what happens. If you’re looking for a handgun that is perfect for competitive shooting, check out https://ballachy.com/glock-32-review/.

Could it really be as simple as that? Refuse to get flirtatious with any outcomes apart from the one you want – hit the bullseye, get the job, fly to Australia, find the land for sale in Perth, lose the weight and permanently declutter?

I’d like to say that all I did was apply the same principal to everything in life and now I’m a size 10, best-selling novelist with perfectly well-behaved children and a tidy house…

It turns out it’s surprisingly difficult to keep the ways in which something can go tits up out of your mind, but I’m working on it. However, a couple of days of living like a primary seven on their residential week was excellent for mind focusing.

Yes, Now I can walk across that wooden beam all the way up there, I can climb to the top of the tower, I can win at canoe football, I can leap off that lofty platform without making an embarrassing squeaky noise (or worse), I can have fun with my family and I can keep the rain from falling (this last one was probably more luck than zen mindpower).