You are here: Home / feminism / A letter to Nicola Sturgeon 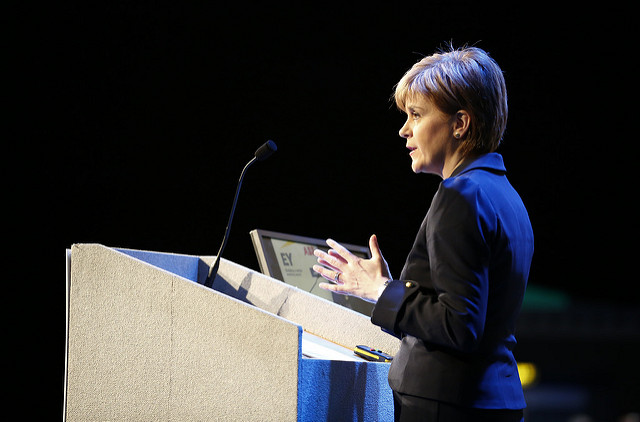 I was sorry to hear your news about the miscarriage. Now you’ve joined the sad and sorry ranks of women who lost a baby. Welcome. There are quite a lot of us, aren’t there?

Some of us went on to have children, others didn’t – they couldn’t or decided the risk was too painful. It doesn’t really matter.

But gosh, you do look pale and fragile in those photos at Ibrox – when it happened. I bet they bring back some really horrible memories… of how you held it together when all you wanted to do was howl. Just as well it was a sombre occasion.

That you threw yourself into your job afterwards has been the SNP – and arguably the country’s – gain.

In the interview you say that had the baby lived, you hope you’d still be doing what you’re doing now. So do I. So do I.

However, what’s more important is that you’ve said that… acknowledging that there’s even a shadow of doubt about it. That you suggest that there’s a chance that motherhood and a political career might have been too much for one woman, even you.

A lot of people have wondered why you’ve decided to share this most private thing. And why now? The sympathy vote?

You get sympathy, certainty. But the women’s vote… a good deal more work needs to be done before that’s guaranteed.

You’ve acknowledged our biggest difficulty. That it might not have been possible to have it all. That you might not even have wanted it all.

You see, that’s the thing. Equality isn’t so much about men and women as about those responsible for childcare and those not.

It’s marvellous that there are so many women at the top of their game now. – you, Ruth, Kezia, Theresa, even Angela. But none of you has children. Coincidence? I don’t think so.

Quite clearly a woman who chooses to breed isn’t any more or less capable than one who doesn’t. But somehow she doesn’t always find it so easy to shine.

You say that if you could go back 20 years, you’d choose a version of your life with kids. Sometimes I think the opposite.

But what can we do about this unfairness? OK, when I say that I mostly mean you, you’ve got a bit more clout than me.

Wouldn’t it be marvellous if your other self, the sliding doors one who’s secret that day in Ibrox was happy rather than heartbreaking, could give you a clue?

What would she need to get where you are today? An attitude change, childcare, legislation, something that lets mothers get off their flipping pedestals? What would she tell you?