You are here: Home / feminism / It’s not just men who are sexist 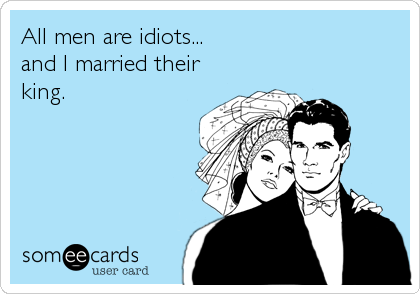 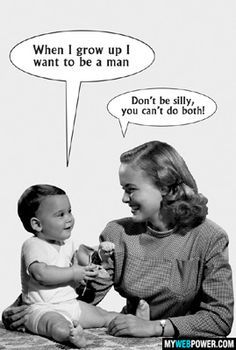 Taking the mickey out of men just because they are men is easy, it’s (a bit) funny, satisfying and, it’s very wrong.
You know the kind of thing – jokes that make blokes out to be overgrown children incapable of anything but watching sport and farting. And that set women apart as wise, evolved creatures, without whom civilisation would cease.
But how wise and evolved is it to take the easy path of sexism while, at the same time, making strident demands for equality? Equality of insult?
No. It won’t do.
Jokes – along with sitcoms and adverts – that use this kind of bone-idle stereotyping are very nearly as bad as men who think it’s amusing to pretend to be tuning into the BBC World Service with your nipples or who tell you to “calm down, dear”.
And it’s not just the jokes, there’s a pervasive belief in the idea that men and boys are somehow lesser creatures than women and girls. They’re smellier, messier, less organised, more childish and generally a bit on the crap side.

Incapable of domestic chores or basic planning, unhappy to be engaged in anything more taxing or emotionally sophisticated than watching sport and playing computer games.
It’s not uncommon to receive commiserations for having so many sons. “Poor thing,” they say. Or even the utterly awful: “Boys will be boys.” Meaningless and insulting at the same time.
My sons are wonderful people – all different but all just as capable as the children who don’t own penises.
I don’t want them to grow up in a world where they feel like they’ve been written off before they’ve tried, just because they’re “boys*”. (*said with an eye roll and a sigh)
Surely we do women of the future a greater service by expecting boys to grow up into emotionally mature, self-sufficient and domestically capable men. Self-fulfilling prophecy and all that. It’s got to be better than expecting them to turn out to be golf-playing, flatulent oafs who can’t understand other people’s feelings or take responsibility for anything.
We can’t begin to expect them to treat us with respect until we return the compliment and stop humiliating them at every turn.