You are here: Home / advice / Shitty-gritty: The bottom line on parenting
I wrote this a couple of years ago and, mercifully, it’s not so much a part of everyday life. Though it can, erm, bob up occasionally.
However, I thought it worth another airing if for no other reason than to reassure those of you with crap under your nails that it does get better. 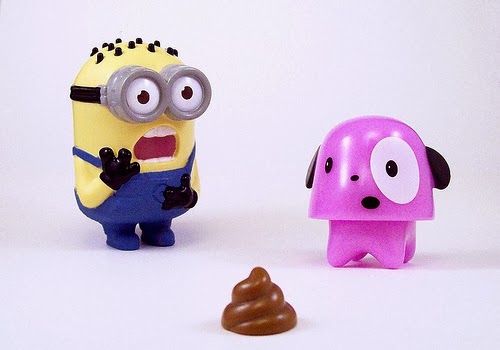 Poo in the bath. Last night’s floating faeces was only the last in a long line of bath-based bottom bombs. 14 years of them, to be more specific.

I mentioned it in a post – as it was the shitty end to an inglorious evening of parenting. But the iceberg of ordure in the bath sparked some discussion on the best coping tactic.

Therefore I thought it high time I shared what I’d learned about poo:

The best way to bring an aquatic turd safely to harbour.

If the brown ice-burg or the paddle steamer of shite is even slightly self-contained then you can be fairly sure it’ll stay together if left undisturbed. So the only course of action is to remove everything else from the bath – child, toys etc, then to drain the water. With a bit of luck you’ll be left with a dry (ish) turd lying on the bottom of the bath waiting to be picked up by a carefully toilet-tissue wrapped hand.

However, if the base of your bath is tilted more steeply towards the plug hole, you may face difficulties and, unfortunately, the first time you won’t know if you’ll end up having to pick poo from the plughole. Bad luck.

There is a school of thought that suggests a fecal fishing exercise is more beneficial, but not to which I subscribe as removing pressed poo from fishing net or sieve mesh is a very challenging task.

It’s easy to think of shite as soft and squishy, however, in most cases it isn’t. The quickest way to discover this is to put unscraped poo-pants into your washing machine. Understandably, you’ll believe that the agitation and hot water will melt and wash away the offending lumps. Wrong. Poo is not chocolate. Follow this course of action and you will end up with stinky brown dottles stuck between the rubber seal and the door of the machine. Removing them will result in poo nail.

Yup. Everyone knows that someone else’s shite under your nails is the true badge of parenthood. But how do you get it out? Obviously wash your hands – three times with hot water and soap as a minimum, plus a scrub with a nail brush. If there’s no nail brush use a baby wipe pushed under the offending nails.

Turd taming is bad enough is you’re braced and prepared – if your armoury of wipes, disposable bags, soap etc is to hand. However, the worst is when you, swiftly de-bagging your toddler, find yourself fist-deep in the warm stinky stuff. There’s little that can improve this unfortunate state of affairs when it happens, however, a bit of preparation helps. Firstly, train your children to freeze on command, usually “STAND STILL”, that way you contain the incident and, secondly, if it smells suspicious, it probably is, so proceed with caution.

Don’t waste time working out where it came from?

You’ll never learn how that little pile appeared behind the sofa, or the odd lump-ette under the kitchen table. The smear by the sink or the besmirched t-shirt. I’m inclined to think it’s a magical substance, bewitched by ill-tempered plumbing pixies, there’s no other explanation.

If your nostrils inform you that something unpleasant is in the air, you can be assured that the nastiness emanates from crap. It will be somewhere – if not still contained by the undergarments of the excrementor, then skulking somewhere nearby ready to booby trap the unwary. Go and look for it now, but first put your shoes on.

Eventually, they tell me, other people’s poo will no longer feature in day-to-day life… I can’t wait, but, meantime, please share your scatological savvy.