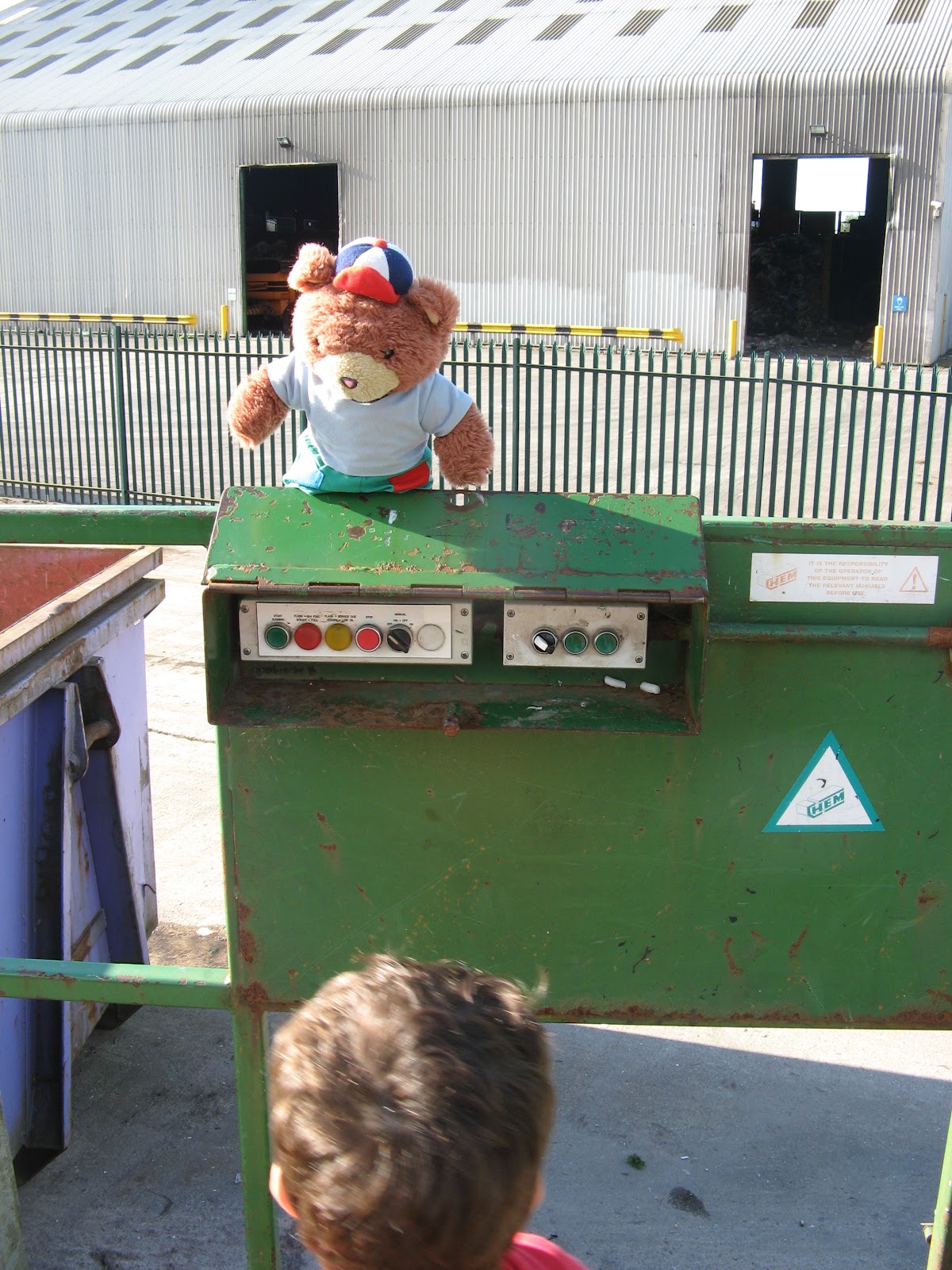 An old post, but reinstated for Super Sister who had the school animal at home last week.

Ted is a slightly grubby teddy bear wearing ill-fitting shorts and a slightly sneery expression. The idea, the nursery ladies said, was that he would spend the week with us, write his diary and come back to nursery the following week for another child to take home.

Later I unpacked Ted’s luggage – a backpack with a spare pair of shorts, an ID card and his diary.

Ted had already been to four homes before our. Lucky Ted.

According to his dairy – written in his really neat (if inconsistent) handwriting he had had a wonderful time doing educational things and being cherished.

How marvellous. I wonder what will happen at the Palace of Bundance.

Here’s what Adventure Ted’s diary really should have said:

Arrived at Boy Three’s house to find it noisy – much noisier than nursery. There are two big brothers, unimaginatively called One and Two. They are yelling that Boy Three has once again come in and piddled all over the floor. He never does that at nursery, you know. Very nearly got my fur wet. If Boy Three hadn’t kicked me I’d have got soaked. Nasty. I’m not sure I’m going to like it here.

I don’t think Boy Three quite gets it. I’m the guest, he’s supposed to be looking after me, giving me the good stuff. It was all going so well last night, I got propped up to listen to some carefully chosen stories and then tucked into bed all warm and cosy, until the middle of the night at least. Suddenly I find myself hurled across the room and, when I finally work out what happened, I find Boy Three isn’t here any more. Where’s the little so-and-so gone? He’s only pushed off into his parent’s bed leaving me all cold and alone. There’s also a faint smell of wee here too.

Not much of an adventure today – I get taken to the dump. Marvellous. I thought they were going to fling me in the skip at one point. No, only thought it would be good to get some interesting photos. Other families take me to the Science Centre or the petting zoo, this lot? No chance. I’ll be lucky if I get a spin round Morrison’s while I’m here.

I’m getting a bit fed up with Boy Three’s attitude. To be fair, the mother is making a bit of an effort. “Let’s get Adventure Ted some supper, what would he like?” That kind of thing. Only Boy Three is a right smart arse and replies “Adventure Ted can’t eat any supper, his mouth doesn’t open because he’s a toy.” Bloody does. Later she put a bike helmet on me – not a good look, love. But she suggests a spin on Boy Three’s new scooter. Boy Three grabs me, turns me upside down and pulls at my legs. “Look,” he yells. “Adventure Ted can’t scoot his legs are too short and he doesn’t have any knees.”

They know I’m not supposed to get wet. It says so quite clearly in my letter of introduction. I’m supposed to be kept safe and clean. But these people are idiots. Why else would they put me on the kitchen counter when that small buffoon Boy Three is having his juice. When I say having his juice, I mean slurping and spilling his juice and then demanding some more. The fur around my legs was really rather sticky until the mother put me under the tap. I was mortified. Still, things looked up when they all went out and left the TV on – In The Night Garden, my favourite. Upsy Daisy, she’d get it. Oh yes. For a while I was a happier bear. I would even have had a smile on my face if it wasn’t for the fact my arms are too short and stick out at right angles.

I know they say be careful what you wish for, but I hadn’t really grasped what it meant until today. To be frank I was bored. Stuck at home watching the mother walking backwards and forwards between her desk, the fridge and the kettle was getting pretty tedious. Yawn. Boy Three hadn’t bothered to leave the telly on for me and the mother wouldn’t lend me her iPad. Just when I thought I couldn’t stand it any longer One and Two came home shouting. Then they decided a game of catch the bear was just what they needed. Then Boy Three comes in and puts me on the naughty step – or at least tries to. He gets very cross with me because I won’t bend – I don’t mean strength of character, I mean I haven’t got any joints. With one thing or another, I have never been more ruffled in my life.

Thank Paddington it’s my last day. The father – apparently doing something called newzediting has been busy this week (apart from the momentous outing to the recycling centre) – but now he’s writing stuff in my diary. What tosh! All about having fun and learning stuff. How much I enjoyed Tree Fu Tom, just shows what he knows. Anyhow, it’s back to nursery for me and hopefully I’ll get a nice, wholesome family with kind children and proper parents next time.