You are here: Home / other things I have learned / When your name really determines what you earn

A press release flooded in today. It says that a baby’s name will predict how much they are likely to earn in their working life.

Apparently, Lily and Oscar are the highest earners of their gender. See the image from theknowledgeacademy.com for more. 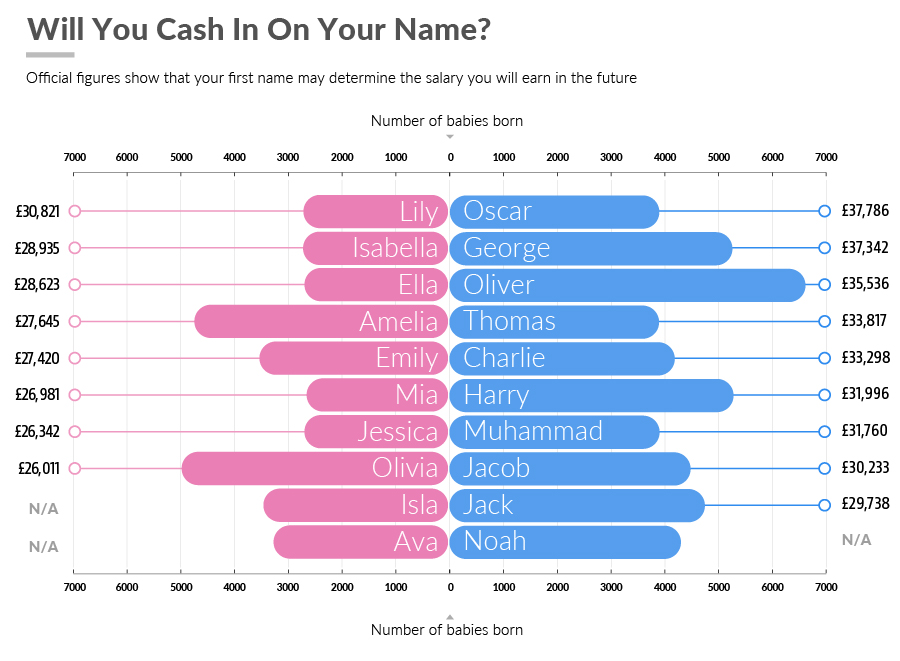 The stats came from information from more than half a million CVs sifted by salary and name.

Accompanying blurb also says that you’ll earn more if you use a middle initial. Like, um, Homer J Simpson or Elmer J Fudd. That men who use a diminutive – Bob, Bill or Danny – will do far better than Robert, William or Daniel. However, Lizzy, Suzy and Bella will be less well paid than Elizabeth, Susan or Annabelle.

Joseph Scott, a spokesperson from The Knowledge Academy, said: “The idea that a first name, and how it is presented on a job application, can influence your career is interesting. I do believe most jobseekers do not factor in the importance of their name when applying for roles, so it is something to bear in mind.”

You don’t say, Joe. What you fail to address is the fact that whether the name belongs to a man or woman has the greatest impact on earning potential – shockingly so.

I’m not sure what to do with this information, apart from get cross. Is it time to remove gender from CVs and application forms?