You are here: Home / boys / Christmas: How to cope when it isn’t your turn to have the kids

I wrote this a couple of Christmases ago and I was reminded of it when I saw another mum chum going through similar this year.

Every other year Boys One and Two spend Christmas with their dad. We’ve been doing it this way for 15 years now. So that’s around seven December 25ths I’ve spent without them and, I have to say, it doesn’t get any easier.

Without doubt, it’s the worst part of any kind of non-nuclear family. At first, I would pretend it wasn’t even Christmas and go off somewhere different, preferably not child-friendly. 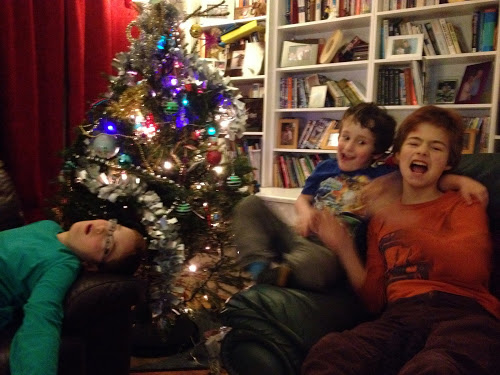 This was all very well until Boy Three arrived. Now he’s expecting something seasonal on the big day. At least a visit from Santa and it’s quite tough to gee up the necessary jollity when two-fifths of the team is missing.

Not that it’s an excuse for a pity party, that’s not my style and it won’t help anyone. Plus, on the festive misery scale, this hardly registers a quiver. This I know.

I also know I’m not alone. Every ‘broken’ home (how I hate that finger-pointing idiom) means that there’s one parent temporarily bereft. Statistically, that’s millions of mothers waking gloomily because they’ve remembered that there’s no one there to open the gifts. It’s just we’re not really supposed to talk about it, certainly not tell the truth. Not having the kids around is painful and the widespread illusion of gatherings, packed houses and harmony doesn’t help a jot. However, no one wants Dreary Deirdre to bring everyone down by admitting she’s dreading the holidays. She certainly won’t get offered a second mince pie. So we keep quiet.

Instead, it’s about making the most, putting out a best foot and seizing the day in whatever way we can. Next year we can deck the halls and push the boat. Here’s what I’ve learned.

It won’t go away. Pretending Christmas isn’t coming doesn’t work, because it is. And it’s coming to get you.

Make a plan. Therefore, decide what you’re going to do and do it with conviction. The day will come and go, you may as well be braced

Suit yourself. In the same way, meat-free bacon-flavour rashers don’t work, don’t kid yourself that going through the usual motions will work. Figure out how you want to get through the day and don’t care what anyone else thinks.

Make another plan. Have something shiny and fab to do with the kids when they get back. You can all look forward to it and remember it after.

Put it into perspective. Go and volunteer, do something for those less fortunate. And there are many. Next year, I’m going to find something for Boy Three and I to do for some of Christmas Day before we put on our onesies and celebrate the Baby Jesus’ birth by bingeing on jelly babies.

Skype. I know Boy Three can spend a lot of Christmas Day virtually talking to his brothers. His mother just doesn’t appreciate the fart jokes.

Remember this too will pass. And soon they’ll be back and there’s 723 whole days before you have to go through it again.

The most merciless time of the year

Things you don’t need at Christmas

Why I hate Santa