Months and months of cold and damp (and snow too), then all of a sudden, there’s bird on the wing and grass riz. My favourite season because, just for a while, I can persuade myself that there’s going to be an endless period of wearing shorts and loafing about during long balmy evenings. Balmy, I said.

In case you have the slightest whiff of interest, here’s what I’ve learned during the past few weeks… 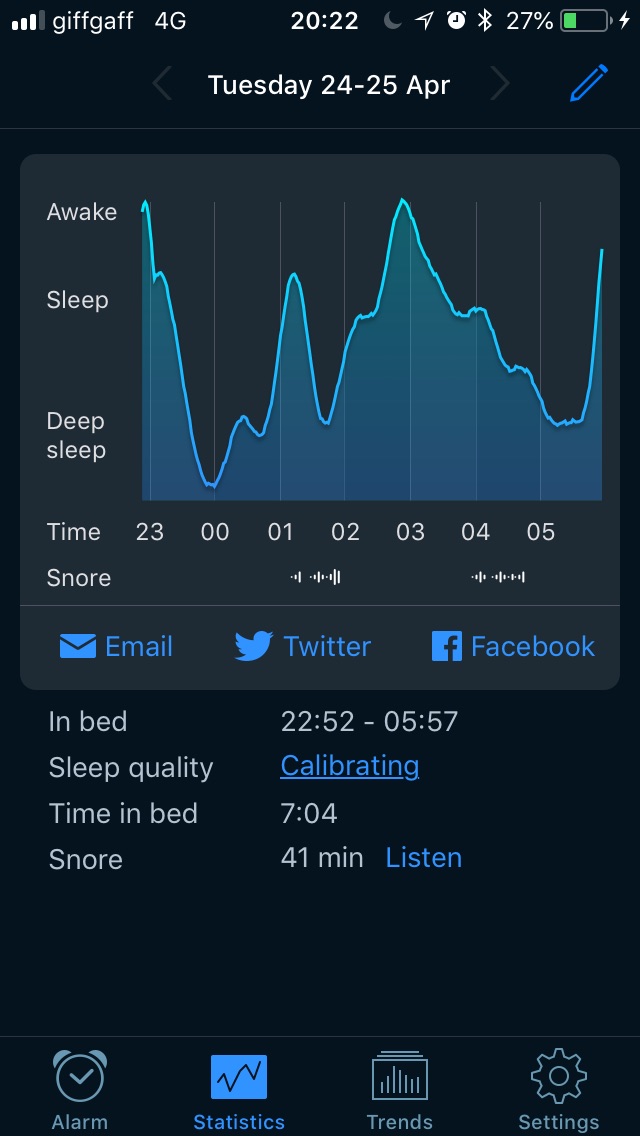 I’ve learned that I really do snore. Don’t tell himself, he’ll only get all ‘I told you so’ about it, but I’ve started using a sleep app that – very creepily – records the noise you make at night. If nothing else, it makes for the basis of a great short story – what she heard when she listened to the recording of the quiet bedroom. (Snores in this case.) My current theory is that it’s something sinusy (I never promised anything interesting here)… watch this space.

Boy Two is a dab hand at taking pictures. Here’s his portrait of Boy Three, who appears to be a bit cross about something – more than likely something Boy Two has done. 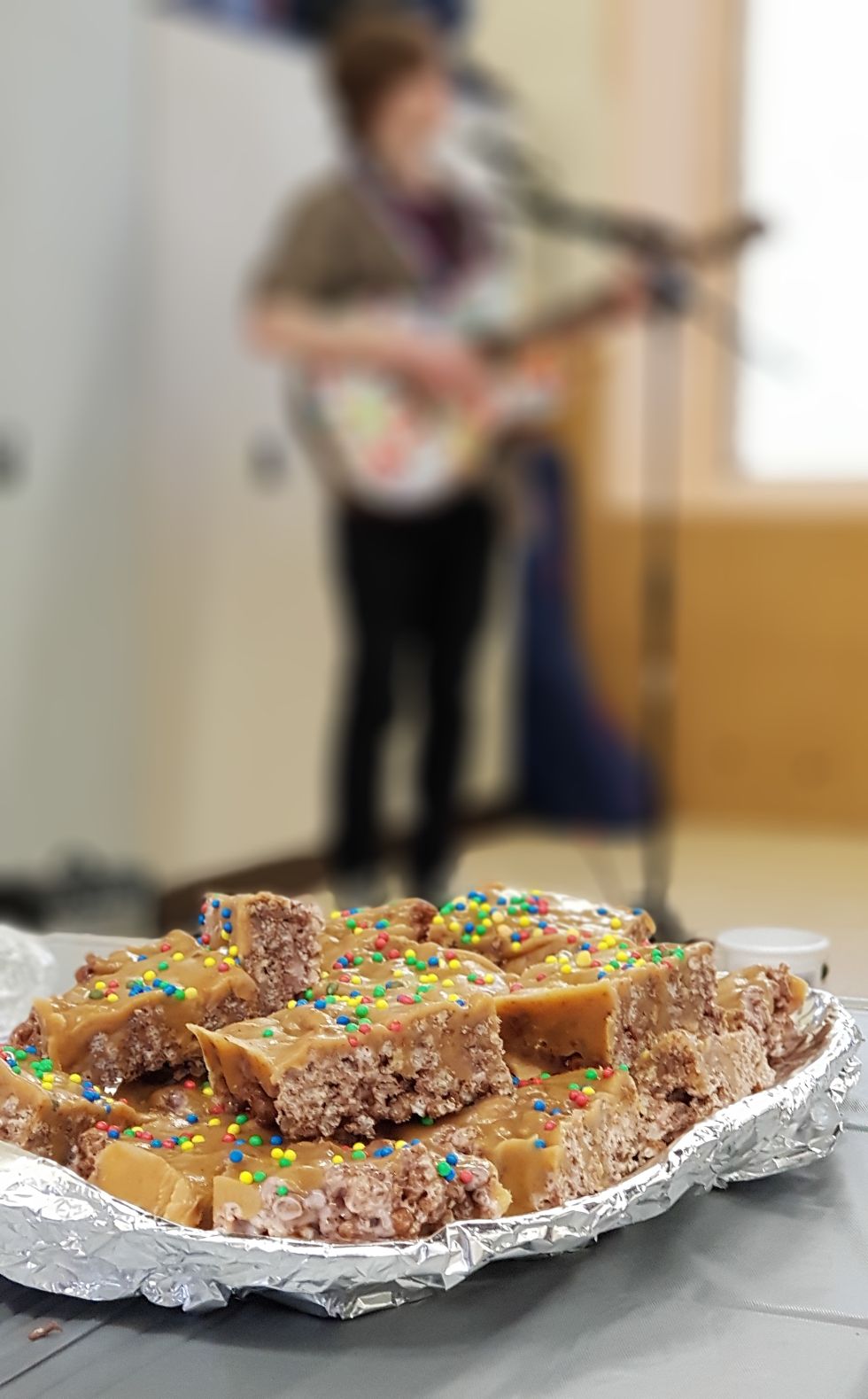 There is occasionally too much cake. Boy Two and his pal (who, along with his mother, did most of the work) organised a fund-raising coffee morning for their forthcoming international Scouting trips. Impressive effort all round, included them and their friends baking up a frenzy in kitchens across Renfrewshire and Inverclyde. The result was more cakes than even a crowd of hungry teenagers can eat. 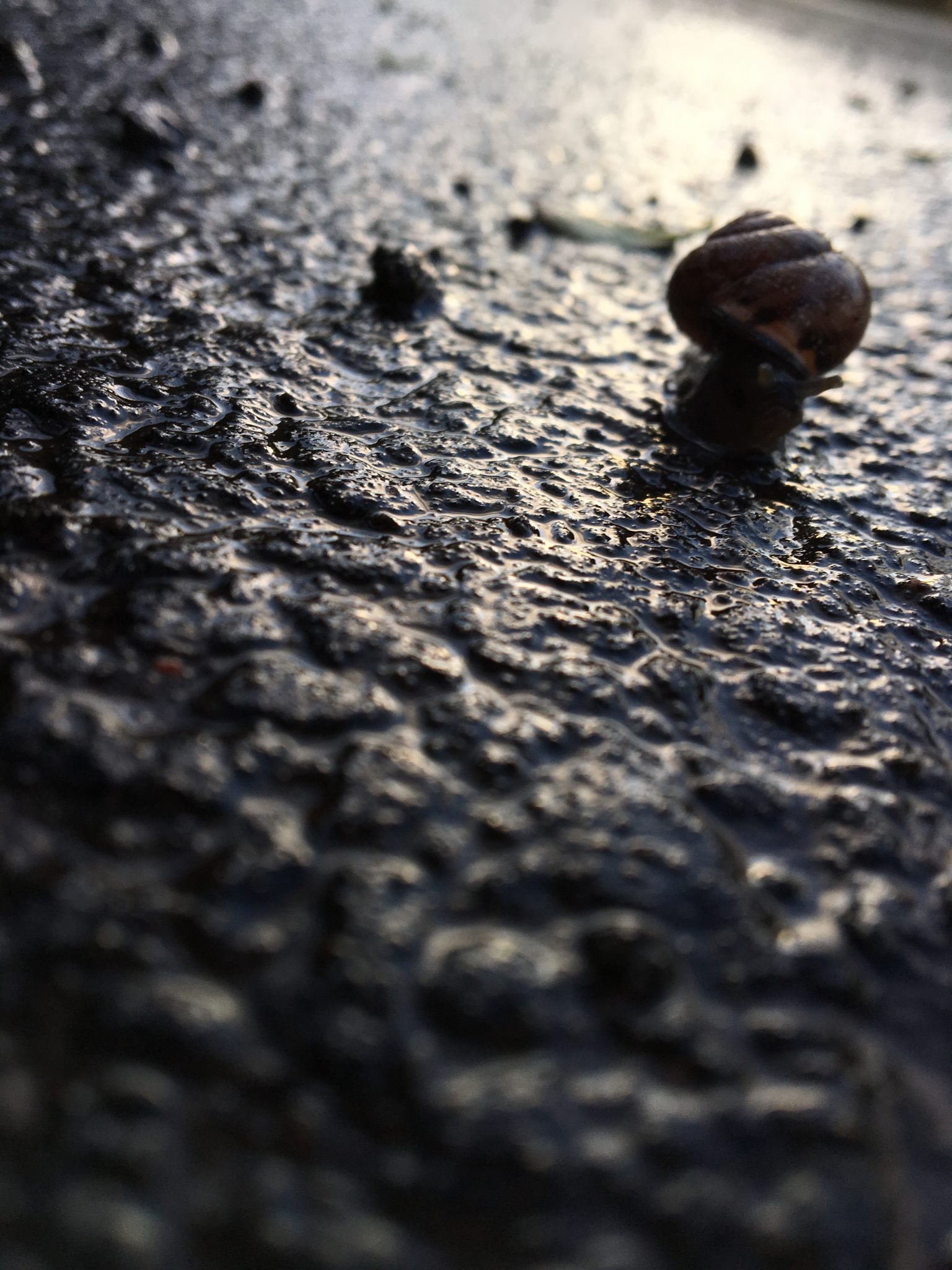 I will use any excuse for a break in the morning exertions. This day it was to photograph a snail before it hid in its shell. The other thing I learned is that a snail can move faster than a 50-year-old woman can organise a phone camera. 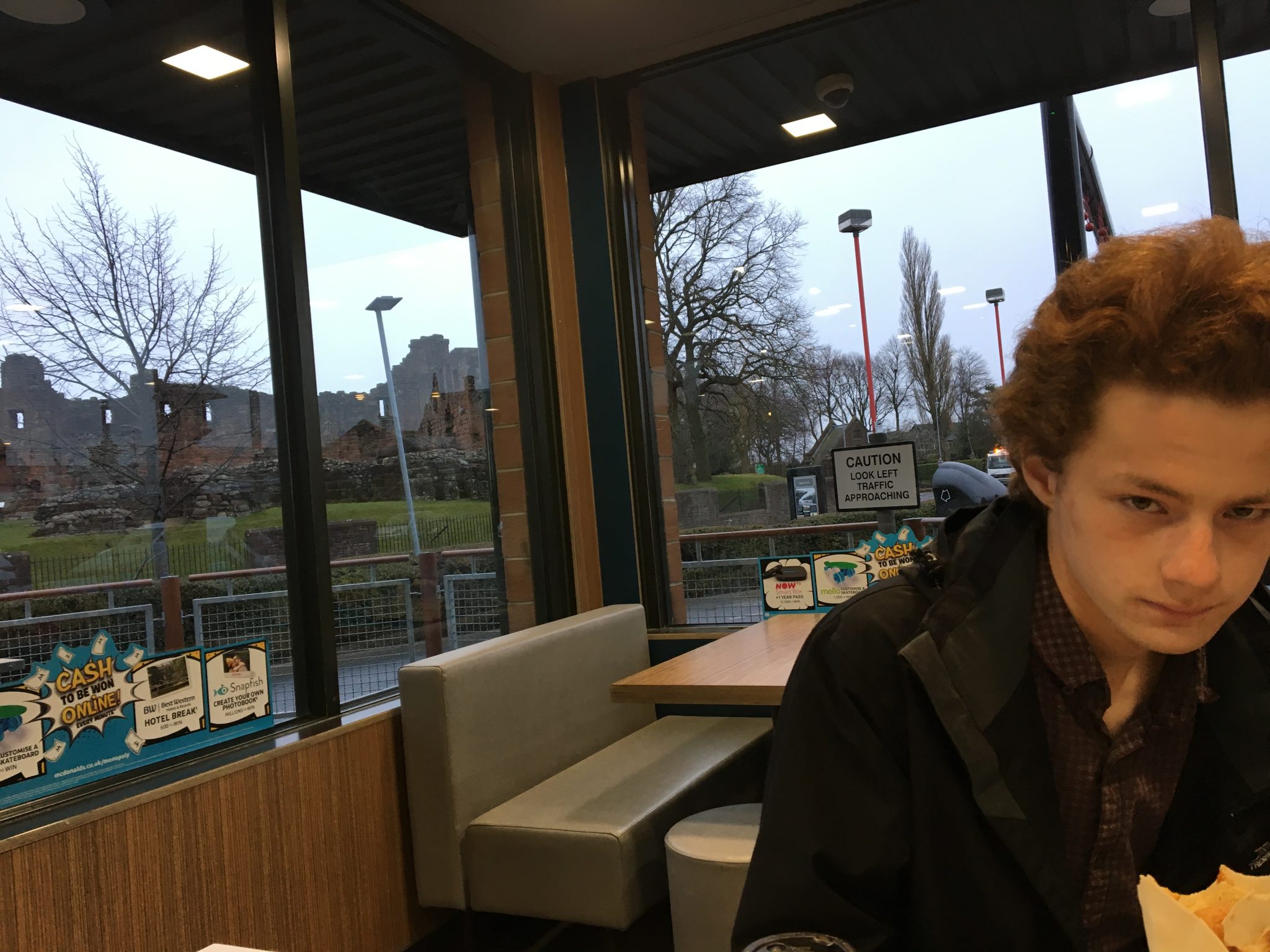 You can make a teenager get up early, but you can’t make him smile. It’s always a bit difficult to pull ourselves away from a visit to mum/granny as we get looked after every so well there, but, sometimes, needs must. This time we had to hit the road sharpish and so I suggested that if we were out by horrid o’clock it would be egg mcmuffins all round. It worked too with the added bonus that no one wanted to talk to anyone either. 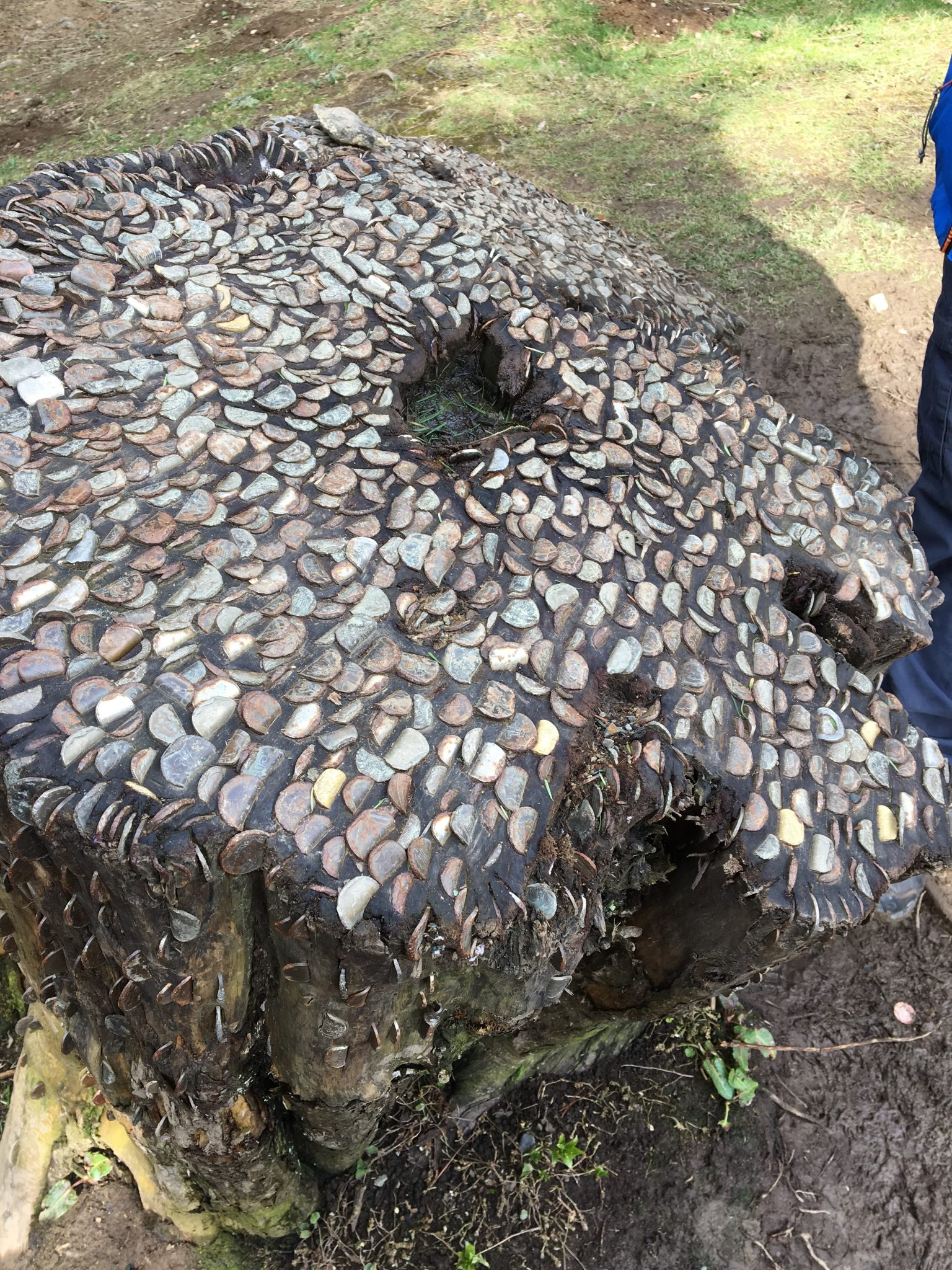 Some people go for a walk with a hammer and some coins in their pocket. OK, maybe they find a handy rock, but it’s interesting, isn’t it? I’ve seen things like this in a couple of other places and I wonder who starts it. What makes the first person say, ‘I know, I’ll bash a penny into this tree stump’? It’s at the start of the walk up Aira Force. 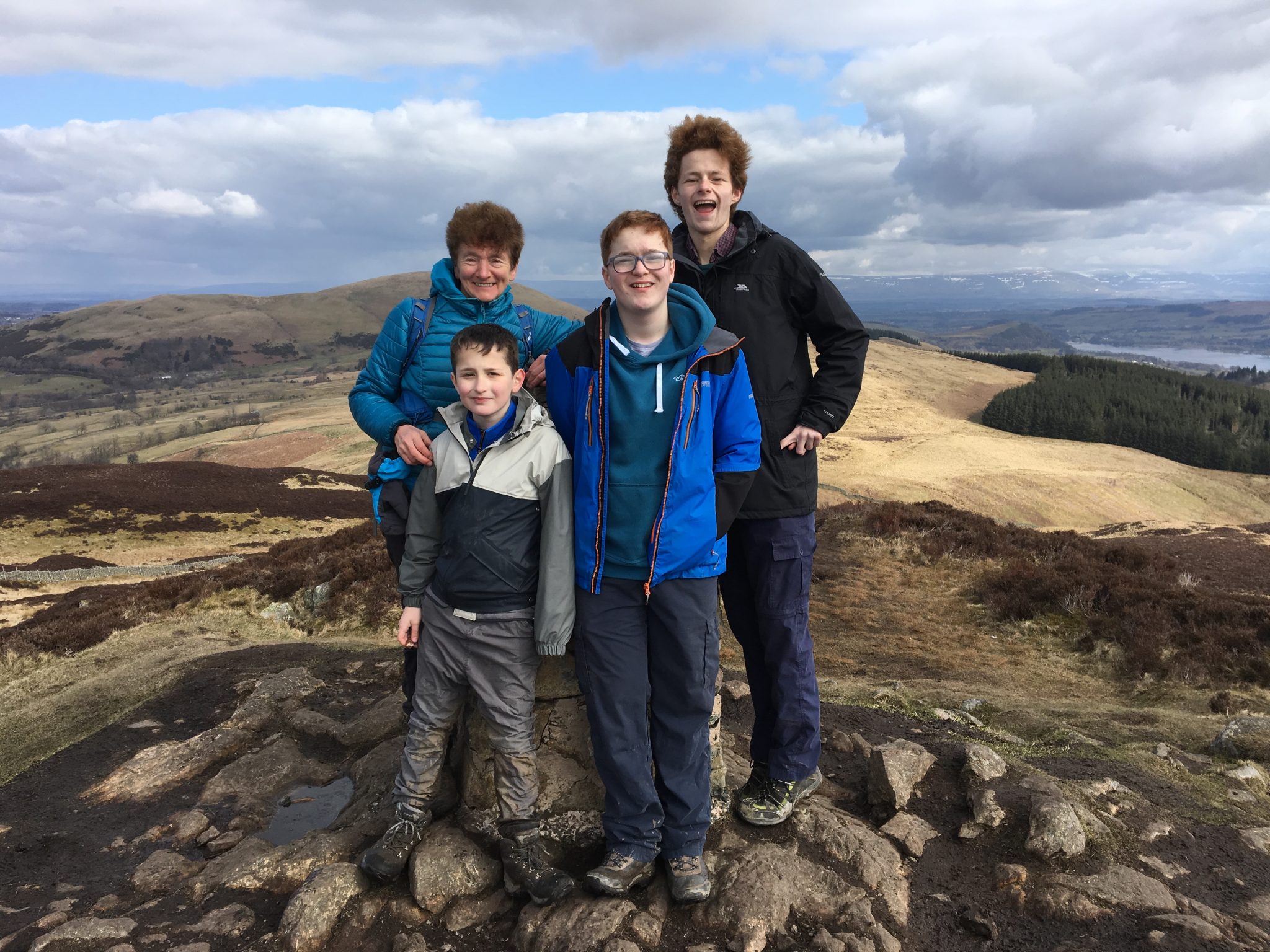 Finally, a whinge-free walk is possible. I knew we’d manage it in the end. The Boys have turned into the kind of chaps who like to climb to the top of a hill without asking if we’re nearly there yet or requiring to be bribed or threatened. Hurrah.