You are here: Home / other things I have learned / Things I’ve learned from my MLitt graduation 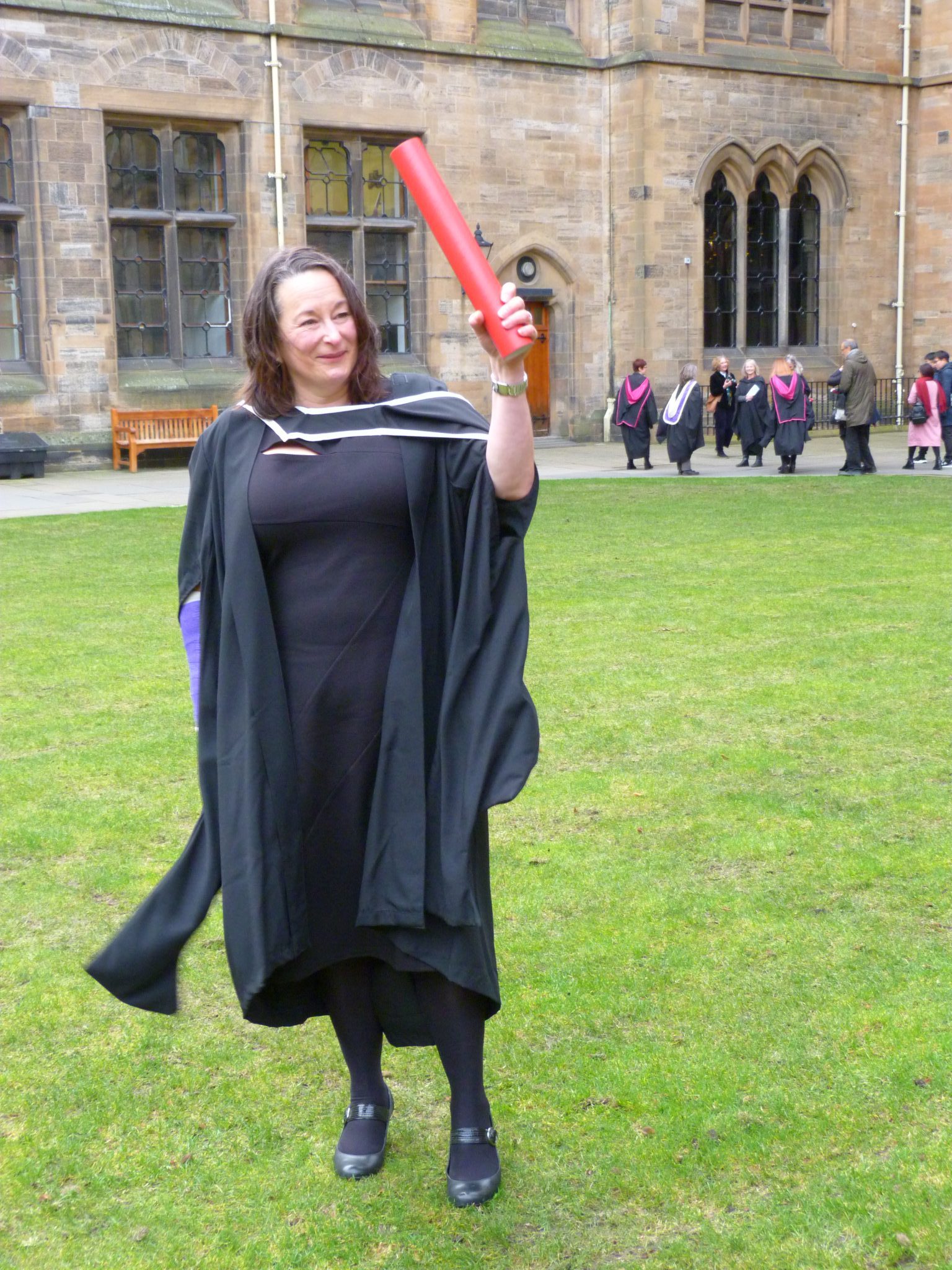 This week I was – at least briefly – to be found strutting around in a rather fetching gown and feeling like queen for the day. It was my graduation – MLitt in creative writing at the University of Glasgow.

While feeling an appropriate level of chuffed, there was a slight hint of sadness that my second brush with academia was over. And something else, a tiny little ‘now what are you going to do?’.

The cloisters are the coldest place in the world. Well, they feel like it in November. And architecturally, it’s an undercroft. A twinkly undercroft. 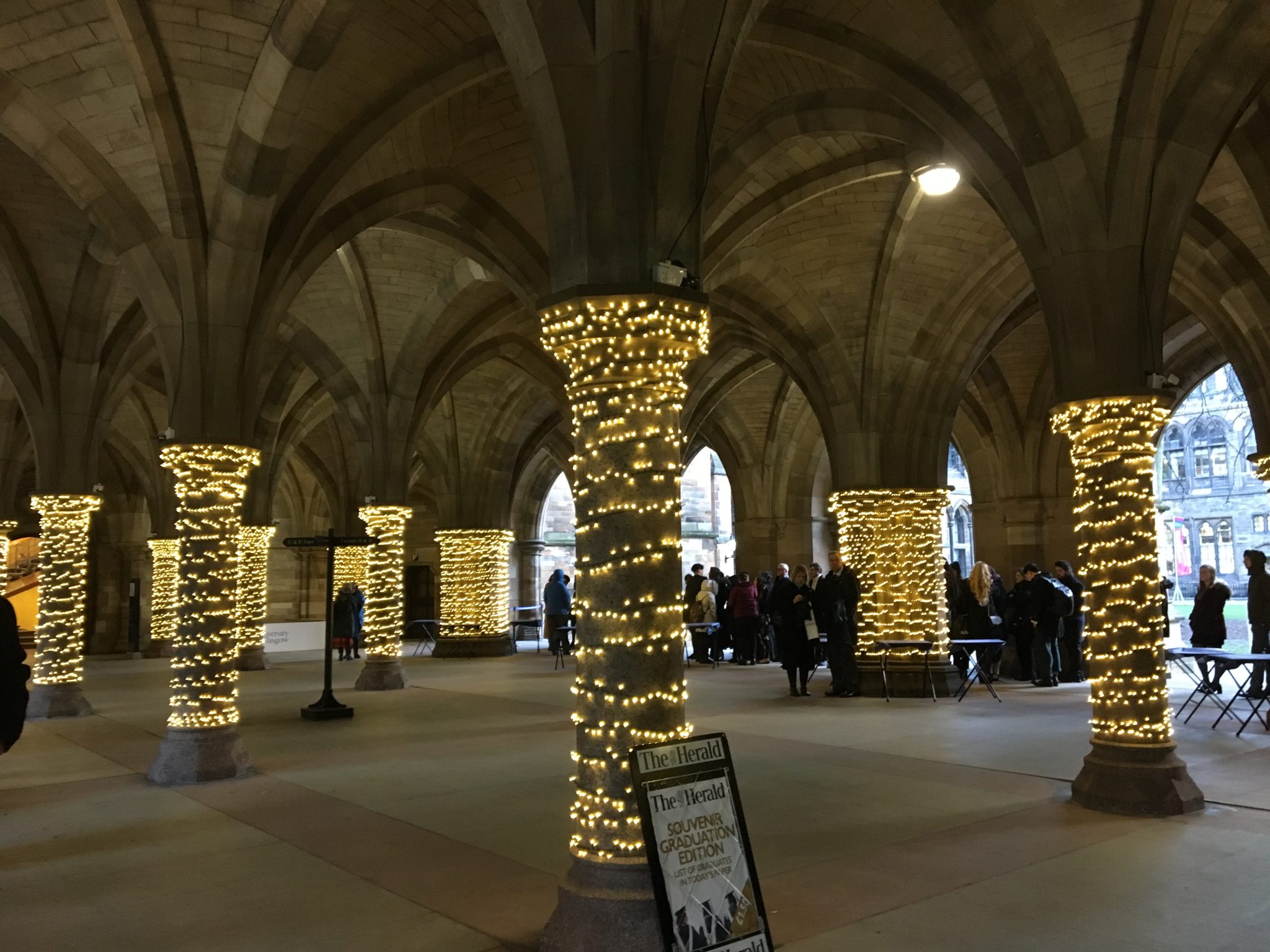 Writing is important, even if no one reads it. Ever written a shopping list then left it in the kitchen, only to find that it didn’t matter because you could remember what was on it? That, kind of. The process of getting it out of your head matters – even if you only are only going to the shops.

How I do creativity. I know that I have to capture my interesting thoughts as fast as I can before they run away, and I’m much, much better at doing this in the morning. Therefore you can sometimes find me up before dawn, tapping away and, thus, too tired to talk by tea time.

That I can talk about being creative without feeling like a wanker. Most of the time anyway… And that being creative, is an important part of being a person and wouldn’t the world be better if we all did some actual creating? So you can stop thinking that I sound like a wanker because I know you still are.

I don’t know enough about literature. Especially at first, I’d spent a lot of time feeling a bit stupid. Someone would say ‘oh, yes, that’s just the plot of Wuthering Heights or Heart of Darkness’ or something and I’d nod and make a note to google. I’ve started catching up which has been a learning experience in itself.

Life’s too short to finish Anna Karenina, Moby Dick or The Count of Monte Cristo. And probably a load of others… The choice to say ‘I’ve read enough’ was liberating. 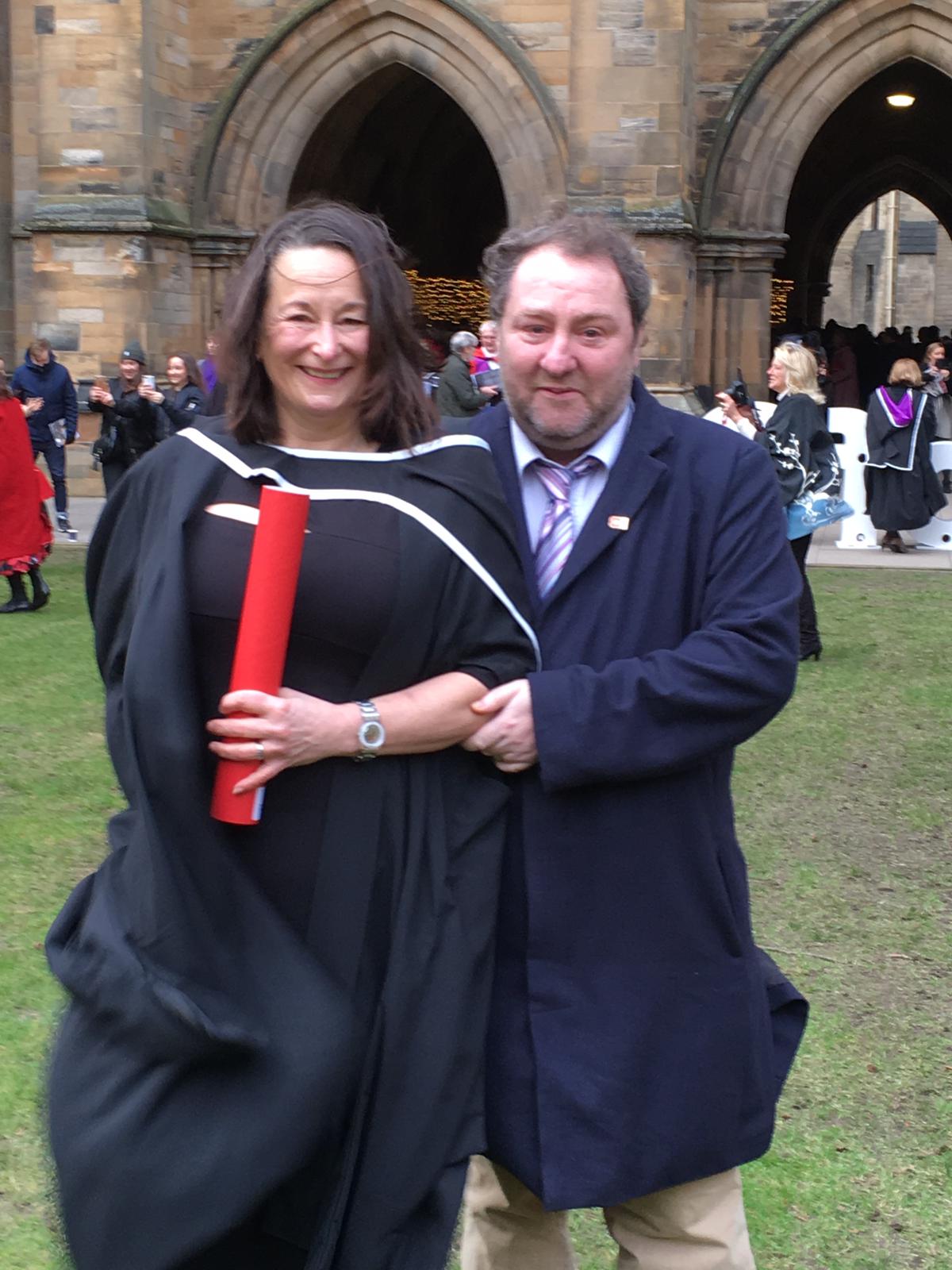 Writing can be quite hard work. Not, of course, that I’m complaining, just that I learned that sometimes you need to rest.

That mace really is 553 years old. It’s just one of the wonderful and incredibly old things about the graduation ceremony. How many degrees have been conferred in its presence?

There never is a right time (AKA The right time is now). I applied to the course after sidling up to it for years. I realised that I’d never have the right circumstance so I’d better just get on with it. Who cares if the house is a tip and the children feral?

If you break your wrist a couple of weeks before your graduation, you’ll have to stand with your arm behind you for the photos. Or else, it’ll be all about the purple plaster cast. (Not plaster, but you know what I mean).

Memorable events overshadow ordinary ones. My first graduation – 7 July 1988 in Aberdeen – was the day after the Piper Alpha disaster. I don’t remember much of my ceremony – only the dreadful misery that hung over the city.

I can’t leave it here. I’m not going to bask for long. I can’t. The thirty years went too quickly and I’ve got things to do in the next 30. Oh? What? Good grief, I’ve no idea what I’m going to do next. Yet.

Insert cheesy heading about being true to yourself here

Next stop… the classroom

◄ Cold comfort: Ten ways I know it really is winter
How to avoid arguments: Top tips for married couples ►