You are here: Home / Uncategorized / A seasonal cleanse

In the interest of seeking silver linings (a good thing, apparently) I was prepared to repurpose my pre-colonoscopy bowel prep as a post-binge detox this week. And so it was…

By Friday morning, my scales told me that I was the equivalent of six jelly babies lighter than I had been at the start of December. Happy dance.

The procedure itself was (apparently: I was snoozing at the time) a success. I didn’t feel like I’d been hit by even a really small and considerate bus. Last time, the bus was gigantic and careering – something to do with having a ‘brisk epistaxis’ (nose bleed) in the middle of it all.

The outcome, in classic good-news-bad-news style, was ‘it’s not cancer’, but there is ulceration at the top of the colon too, so it’s now colitis not just proctitis. An upgrade – go me! Still, it’s a step closer to finding a solution.

The next upside was totally guilt-free cheese consumption to replenish the calorific loss (and obviously obliterate any benefits from the cleanse… ). There followed mozzarella sandwiches on white bread fried in butter, pizza topping* then a very delicious cheese haul from Arran (thanks LF).

Discharge from the endoscopy suite into the care of Boy Two, I clutched a pompous set of instructions which include dire warnings about not signing anything important and not operating dangerous things including kitchens. This seemed like the perfect excuse to break my self-imposed rule about not watching any telly to watch the latest Dracula adaptation.

Episode one: A sleazy vampire meets a sharp and witty nun with lots of jump-scare fun and fake blood.

Episode two: Some of the above with a bit in the middle that goes on a bit long.

Episode three: Eh? Ok, the idea of being buried alive is scary but we didn’t need anywhere near as much burned flesh angst as that.

If it was my TV show, I’d have finished it at the end of episode two with the creepy count getting a stake through the heart and then launched a spin-off with Zoe Van Helsing fighting dark supernatural forces all over the world. 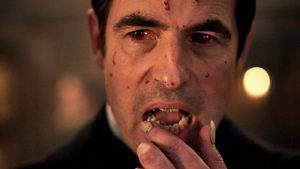 *I get a bit bored with pizza bases which (in many cases) seem to me only one step up from MDF, so I often pick off the topping. Not only is this a much tastier way of consuming pizza but it drives the kids nuts. They think this is deviant behaviour comparable to willfully saying me-me rather than meme.

◄ New Year goal setting, other failures and the things they taught me
Grateful for another self-help book… ►