You are here: Home / review / Vacuum-packed chicken feet, a big screen and a stage

It was a shock, I’ll admit. I know we’ve seen people in surgical masks all over the news and all over the world, but that’s still there and not here. Very much not here. Nothing that interesting ever happens in our corner of the world. I used to hate that. The fact that the semi-rural northish places I have lived were miles from the action – the centre of things. But now, it’s most definitely a bonus.

Anyhow, there we were, Boys One and Three and I ambling into the teeth of the bitey winter wind in Stirling. On our way back from a jolly trip to see The Personal History of David Copperfield when we passed the Chinese grocery. Boy Three has a fascination with all things Asian, especially sugary treats in exotic packaging stocked in the kind of shop that also sells frozen and vacuum-packed chicken feet. I was happy to mooch a little longer, avoiding the drive home and the Sunday night where-did-you-put-your-PE-kit flurry. Boy One was feeling tolerant. So we went in.

The woman behind the counter said a welcome hello and put on a face mask, in one slick maneuver. Eh? Who was she protecting? Given that she was cheerfully breathing all over her shop until the moment we walked in, I suppose it wasn’t us. Has the threat of coronavirus (or Corvid-19 – Sunday name for a Sunday) reached this snoozy corner of central Scotland? Was she reacting to a general risk of infection or was it something about us? It certainly didn’t make the chicken feet any more tempting.

Obviously, our trip to Stirling was primarily to see Boy One (Can he still be a Boy now he’s 20? Man One sounds a bit strange) but by happy coincidence, the cinema there appeared to be the last one in the country still showing the David Copperfield movie. A bit slow off the mark, I thought I’d missed it. Phew.

I loved it. It was charming, funny and scenic without any of the over-the-top gurning and hand-wringing that can spoil a Dickens adaptation. Boy Three liked it well enough, he said, while Boy One (Man One) wasn’t keen, ‘Not very funny and a bit slow’. You can’t please everyone all the time. But we did agree that the best bit was the casting – proper ‘colour-blind’. Not even half a moment in and it was clear that the best person for the job got the role, regardless. 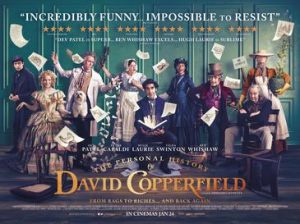 The same thing happened the previous evening at the opera when Richard Nixon made his entrance. Did you see the way that I said that like I swan off to the opera all the time? Hmm. Don’t be fooled I don’t. I was captivated, fascinated and moved, but also somewhat baffled. Not an opera buff – the opposite, in fact – a baffled unbuff. (Do you get many other kinds of buff apart from theatre or movie? Can I be a supermarket buff? Or a punctuation buff?) But, yes, the show? It was Nixon in China by Scottish Opera. I went home with a happy head full of questions for a very contented Google.

Wouldn’t it be wonderful if we could stop seeing other difference just as quickly as the colour became invisible? Gender, sexuality, disability – maybe they really can become insignificant with a bit of help from showbiz and the arts. Now that would be good.

◄ The trouble with time
Curtain up on getting your theatre tickets… ►