You are here: Home / family / Coronavirus: We’re all in the same boat

Once I was a sailor. Or, at least, I spent a couple of years messing about on boats. It left me with fond memories and a vague hankering to put the oilskins back on and untie the lines, but mostly I don’t think of it.

Until now, that is…

It started way back the last time I set foot in a shop (three weeks ago, probably), when the fruit and veg aisle did that whooshing dream sequence thing and I was transported to a mid 1990s supermarket, one side of the Atlantic Ocean or the other. In this parallel universe, I’ve got a very very long list of things to buy that corresponds to a menu that feeds quite a lot of people for potentially weeks. I may or may not have a reliable freezer, I certainly don’t have a very large budget, but I do have a plan.

My plan involves picking the groceries carefully (reach as far back as possible for the newest stock) and storing them to last (brought to air temperature slowly and wrapped in paper). Having dried and tinned stuff that can be spruced up with something like cheese, chorizo, honey or chocolate. (Potentially all at once). I’ve got yeast for the bread, UHT milk for the coffee, cheese (did I mention cheese?), dried herbs (primarily for flavour but also to disguise the presence of weevols), there’s no point in a kitchen scale – I’ll need one of those conical measuring things, I’m going to leave the corrugated cardboard boxes behind because that’s where the cockroaches live…

Whoosh. I was back in Tesco and the weevols and cockroaches had scurried away.

I wasn’t provisioning a yacht for an ocean, but I was thinking about how to keep several people fed for goodness knows how long when the privilege of nipping down to the Co-op for an emergency bunch of basil might be suddenly taken away from us. Emergency basil feels like a lifetime ago already, doesn’t it?

And since then that at-sea feeling has returned. Living in lock-down is quite a lot like a long sailing voyage, a round-the-world one probably. While the likes of Robin Knox-Johnston and Ellen McArthur achieved great things, I always struggled to see the point of all that effort to end up back where you started – for me it was journey and destination.

Sadly, we’re not heading for somewhere warm and exotic. No. Not even somewhere new. We’re hoping for back where we stared yet plotting a course for the uncharted. Until we get there, though, we’re stuck on this ship.

Here’s why lock-down is like sailing a long way: 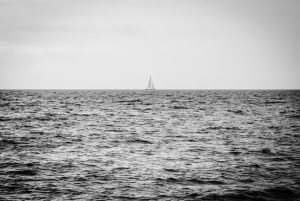 ◄ Coronavirus: How does this make you feel?
Beating Stress in a Lockdown ►