You are here: Home / review / Menstrual cups are not the bad guys

I was out last night – past midnight – with drinks and dancing and wearing a frock. It was a lovely, sparkly do and all the merrier for the sensation that it was the last hurrah for a while anyway. So that was all tremendous, even if I’m ever so slightly fuzzy today.

It doesn’t happen very often these days, the full getting girlied up* thing – attending to makeup, tights, hair, shoes, pits, perfume, putting the stuff in a smaller bag. And, as I was pressing bravely through the tedium of blow drying my hair I was struck by what an unholy faff it all is.

(*While looking for the right phrase I had to reject tarted up, dollied up and gussied up for reasons of differing etymological unsuitability.)

As Tammy said, it’s hard to be a woman. Which got me thinking – you see, it takes a long time for a blow-dry – about a news item that had bothered me this week.

It said, menstrual cup misuse ‘can cause pelvic organ prolapse’  which would hardly make them a tempting prospect – if not actually terrifying. We have enough actual baddies poised to harm us at the moment without adding menstrual cups to the list with this kind of hysterical nonsense.

Yes, I know I haven’t had to dust my Mooncup off for quite a long time now, but I’m still qualified to speak in its defence. I used one for years and found it to be an excellent invention that saved me lots of money, was better for the environment and a whole lot less hassle than tampons or pads.

Is it squeamishness? I don’t know, but it strikes me that if we all understood how a menstrual cup works then we’d avoid the (probably fairly tiny) risk of prolapse the article talks about.

Menstrual cups work by forming a seal with the walls of your vagina so that the blood can’t get out – like an upside-down lid. It’s not quite as simple as putting a bucket under a drip. The seal is your friend, it stops the leaks, even if you tip the bucket up. 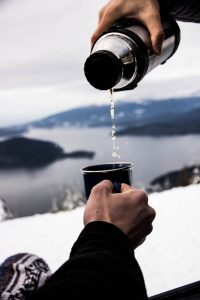 Getting the cup inserted and forming a seal is easy enough – think pop-up tent opening in a wardrobe. The issue is taking it out, and what’s important here is breaking the seal first. Squish the bottom of the cup, twist it, put your fingers in the top – whatever, but break the seal before you pull it out. Do this and there’s no risk of prolapse.

I think it’s simple, but back when I bought my first menstrual cup, there was only one brand on the market – Mooncup – and it came with lots of well-put-together advice. Nowadays, I understand there are dozens of manufacturers, some of whom don’t explain the seal issue as well as they ought, or at all in some cases.

We are talking about periods (you know, that perfectly ordinary thing that half the population has for a huge chunk of its life) a bit more, which is great. The taboo is reducing. And steps to end period poverty are even better. I still wonder why – among the move to offer free sanitary products in Scotland, there hasn’t been a plan to give everyone a menstrual cup (with full instructions) because it would certainly cut the nearly £10m this initiative is estimated to cost.

◄ Coronavirus: Stockpiling or a feast of clearing out
Self isolation: Day one, things I’ve learned ►