I think it was the piano that did it. Googling the piano like the yamaha dgx 640 digital piano, and wondering whether Amazon (or whoever) would be able to deliver it. In a dull moment (of which there have been surprisingly few) I found myself wondering about all the marvelous things we could learn during our initial isolation and all the long months that may follow it. That’s when I realized that I needed to grasp the situation with a firm grip.

Napoleon had a point. About having a plan, I mean. I was flailing a bit yesterday and I suppose it wasn’t surprising. All the routines and habits that glue life together had suddenly been removed and, yet, there was still work to be done and people to be looked after. It was Super Sister who gave me the clue – in her efficient way, she met her son’s school closure with a homeschooling timetable. This afternoon I called a house meeting and we made a plan – rules, expectations, improvements chores and things we can do that aren watching TikTok, you can get TikTok followers if you have an account. 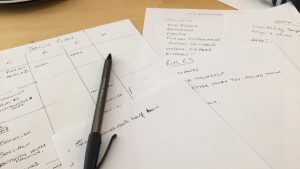 Asking for help is difficult. The offerings of assistance are amazing. People rallied and groups were organized to collect things, shop and look out for folk – proper community. And then we needed a hand. The Panther’s prescription was waiting for him in Boots, only he’s not allowed to go. What a struggle to actually say ‘please can do this for us’. I’m going to add ‘practice saying help me’ to the list of things to work on while we’re stuck here.

This isn’t working from home as you knew it. I’m a dab hand at working from home, as a freelancer for more than a decade then as a ‘proper job person’. I know the pitfalls of the fridge, the Wi-Fi dip when the kids come home and to take off my headset when I go to the loo. But what’s happening now is very different. There are more than one of us at work for a start – we’re lucky to have a reasonable amount of space because it became apparent early on that a kitchen table office inconveniences many people. Then there’s the issue of the kids – usually they are being educated by others for most of the working from home day, now they’re not and a play date is out of the question. My current solution is to adopt a split-shift approach where I’m ‘in the office’ in the morning and then again in the evening so I can mother/teach/jolly along in the afternoon.

If the Wi-Fi goes down we’re doomed. There was a tense moment today involving an ethernet cable and a phone conversation with an IT person from the Panther’s firm. It’s not going to be pretty if Virgin, Sky or whoever can’t keep chucking logs on the internet fire.