It may be another universal division – the list-makers and the, well, frankly mysterious people who don’t have to write their tasks down. (If that’s you… please explain how it works?) 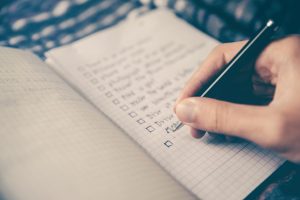 I have lists. Sometimes I have lists of list. I have systems of lists. I have lists with different timescales (today, tomorrow, sometime – also known as the list of things to regret). My lists are in my bullet journal (obviously), my phone, on Trello and on Post-it notes (brightly coloured and lined – yes!).

But lately, something’s been going wrong. I used to get a little (ok, maybe quite significant) kick from another item crossed out. These, days, though, the thrill is gone. This might, of course, be something to do with the fact that the lists grow like bread dough on a hot day while the crossings out are rarer than someone else realising that an overflowing bin needs to be emptied. However, I think there’s something else going on here.

Previously, when we still had the freedom to spend our times how we chose, weekends posed a challenge. Either I could pack the precious days with activities and events – creating memories and looking tremendous on Instagram – or I could diligently apply myself to the to-do list and end up with a less chaotic home, a less full inbox and a marginally lower sense of self-loathing. I would greet an empty calendar with secret joy on a Friday evening – list time!

At first, lockdown had that air about it: I could gorge myself on crossings out with no fear of missing out on a scenic adventure. Or that’s what I hoped.

Only a hundredyteen weeks in and that’s not how it has turned out. Days and weeks go by with nothing much crossed out and the sense of disappointment in myself is growing faster than my waistline. Nothing has been decluttered, nothing planted, nothing learned, not much read and precious little organised. I’m squandering every day on… on what?

(Here I paused to consider the word ‘squander’ and consider whether I could write a poem after Daffodils. You’ll be pleased to learn I thought better of it.)

So what have I done exactly?

In the previous 24 hours I have eaten three meals, made one meal, written (late) morning pages, snacked, attended a medical appointment, been shopping, written a blog post, tidied the kitchen, phoned my mother, helped with school work, collected and dropped Boy One off at his fruit picking job, bought posh coffee at a drive through, sorted some gifts, failed to find rhubarb in the supermarket, listened variously to everyone else in the house, stood on a bit of broken glass, hopped around looking for a plaster, sorted out the work yoga session, had a gin (or two), bought some things online, finished my audiobook, put some washing on, ate some biscuits, had a longish walk with Boy Three, and failed to find time to read the actual book I’ve got on the go.

This is fairly typical for a not-working day, so normally, there would be a 7 or eight hours logged on at work in the list too. Even my harshest critic (me usually) would be hard pressed to say I was lollygagging. And I begin to feel a little better.

Cross with my loafing self a week or two ago, I started these lists – more ta-da! than to-do. A quick note of where my previous day went is all it took and it was easy to see that I’m not shirking. In fact, there’s a lot going on – vague, uncounted supporting things, too-tedious-to-mention domestic things and, of course, earning-a-living things. Seeing days and days of this miscellany on paper helps me feel that things – even if they aren’t headline events – are worthwhile and, in their own way, achievements.

So, there you have it: My slightly life-improving advice for today. Write down everything you did since this time yesterday. If you’re feeling like you can’t get your shit together to do anything worthwhile, ease up and pat yourself on your back for what you do get done.

◄ Coronavirus: Things I’ve learned from school at home
10 Things You Don’t Need to Leave the House to Buy ►