You are here: Home / boys / Weaning can be fun – and other big fat lies

This week’s half-arsed sorting out took the form of clearing book cases and checking whether any of those online book buying businesses were interested in paying hard cash.

You’ll notice that I was vague about who was doing the actual work of this decluttering as it wasn’t me. Boy One was tasked with this important mission and a share of the spoils was negotiated.

Unsurprisingly, secondhand book dealers would not have been interested in a Spanish-English dictionary even if it wasn’t battered to bits like the one I bought last century… when I lived in a Spanish place and often had the need to look stuff up. (Though not often enough, which once resulted in a potentially hilarious confusion when I mixed up gafas and grifos. Potentially hilarious.)

Anyhow, for various reasons (no longer needing to regularly translate Spanish and the evolution of smart phones for the occasional times that I do) the old Espanol-Ingles dictionary has languished on the top shelf for a while… Until Boy One took it down this week.

A couple of things tumbled out from between the pages. 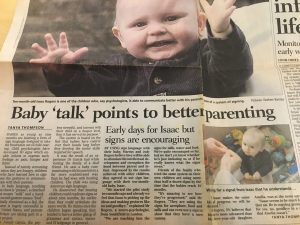 A  cutting from the Scotsman (17th March 2000) and a booklet called Weaning Can Be Fun by Annabel Karmel. 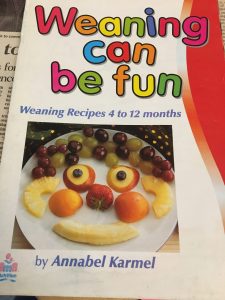 Goodness me, it’s been an eventful 20 years (even if none of the events required Spanish words to be looked up). Here’s what this misfiling brought to mind:

How much parenting rules change. Back in 2000, Annabel was busy urging you to fill your little tot’s face with anything from cheese sauce to liver “soft-cooked and trimmed of gristle” from four months old. These days you’re urged to wait until at least six months before you even tempt them with a tiny crumb of rusk.

Also, how much babies have changed. Look what all that liver and cheese sauce did for them: 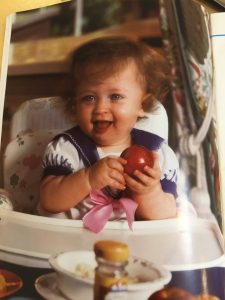 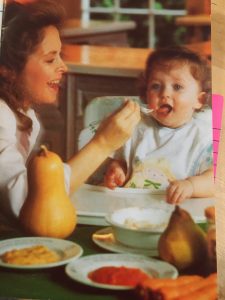 Clearly, if I’d worn more lip gloss or dressed them in sailor suits, my children would have been able to eat their multi-coloured mush without looking like someone had vomited on them. I was very pleased to leave the weaning years behind.

Weaning wasn’t any fun. Nope, from the two-handed egg fling, to having custard in your hair, none of it was fun. Sitting down to a meal with your children that they can eat themselves (or better yet have cooked for you) is much more fun.

Autistic kids don’t learn sign language very well. The baby talk article is about how you can teach your baby sign language and they’ll then be able to tell you when they need a poo or which toys they want to play with. That way you’ll avoid the desperate and exhausting guessing game when your little treasure has another howling fit. Or that’s the theory.

Only in March 2020, I didn’t know autism would have anything to do with me and I’d never even heard of Asperger’s. I only knew that my baby wouldn’t learn any sign language at all, no matter how hard I tried. I gave it up as a bad job feeling like a failure.

Dates might be significant. That paper was bought on my brother’s 29th birthday. I vaguely remember that he came to visit around that time – but I can’t stretch my mind to the details. Did I buy the paper along with a card? Who knows? It’s probably just as well we none of us knew that he would only have a few more birthdays with us.

Things change: things stay the same. Most things panned out fairly well – even if the routes taken were at times alarmingly unpredictable. Every year brought fresh surprises. Meanwhile, DFS was having a sale. 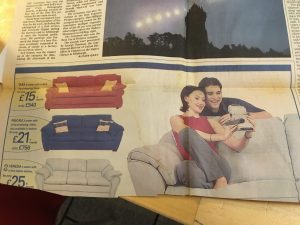 ◄ Skin Resurfacing: What Are Your Options?
Statues: celebrate the changes ►