You are here: Home / Archives for January 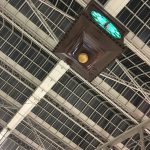 It’s miserable, isn’t it? Pouring down, grey, skint, dark, resolutions burst. January is a bit of a stinker, whatever way you look at it. My recommendation for a cure is a trip to the Rotunda Comedy Club in Glasgow. It’s the city’s newest comedy club and, according to its own publicity, the biggest. I visited […]